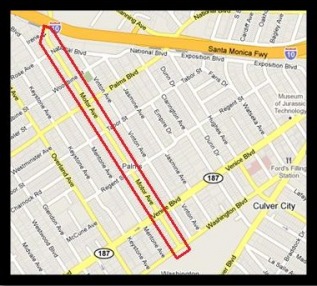 Motor Avenue is located in the Palms community of Los Angeles. It serves as a prominent connector street between two pedestrian-active destinations,  growing Downtown Culver City and West Pico Boulevard. Motor carries the bulk of traffic delivered to and from the I-10 and other parts of West Los Angeles.
Motor Avenue has a bright future as a livable, walkable street with a few improvements. The current public policy climate of encouraging pedestrian-oriented design serves as an advantage for realizing changes in our area.

Income
* $50,684 median household income (2008 dollars), about average for the city of Los Angeles but low for the
county.
* In Los Angeles County, Panorama City, Highland Park and Leimert Park have the most similar household
incomes.
* The percentage of households earning $20,000 to $40,000 is high for the county.

Housing
* Average household size of 2.0 people, low for the city of Los Angeles and low for the county
* Unincorporated Catalina Island, Veterans Administration and Boyle Heights have the most similar percentage
of homeowners in Los Angeles County.