Check here for train testing and closure information. Expo Phase II Construction is in full swing!
The Exposition Line, currently in the Phase II construction stage, will create new, fast access from downtown through Culver City and to the beach. MAIA is striving to address the issues that this new transit line will pose for the community, identify potential challenges and benefits, and work to prepare the area for the influx of traffic that the Expo Line will inevitably bring through Palms. Below you can find information about the proposed line, current progress, as well as historical resources and local community groups advocating for and against the project.

PHASE 1
The Exposition Light Rail Transit Line (Expo Line) will travel along the Exposition railroad right-of-way between downtown Los Angeles and Culver City. It will share a track and two stations (7th St/Metro Center and Pico) with the Metro Blue Line as it leaves downtown Los Angeles. It will then travel along the Exposition right-of-way to the newly approved and funded aerial station at Venice/Robertson. Nine new stations will be constructed along the Expo Line route. In addition to the station at Venice/Robertson, the new stations will be located on Flower at 23rd Street and Jefferson, and on Exposition Boulevard at USC/Expo Park, Vermont, Western, Crenshaw, La Brea, and La Cienega.

The Expo Line will be approximately 8.6 miles in length and parallel the heavily congested I-10 freeway. Estimated travel time from downtown Los Angeles to Culver City is under 30 minutes with a projected ridership of 27,000 by 2020. The Expo Line project is considered a “Transit Parkway” that will be enhanced by bike and pedestrian paths, as well as trees and landscaping along the alignment. 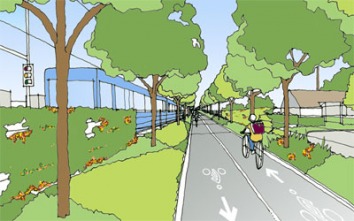 Rendering of bikeway along the Expo Line
PHASE 2
On February 4, 2010, the Expo Board of Directors certified the Final Environmental Impact Report (FEIR) for Expo Phase 2, the extension of the Expo Line from Culver City to Santa Monica. As a result of the Board's approval, engineering and design work will commence and elements of construction will begin in 2011.

View a "virtual ride" of Phase 2 below! 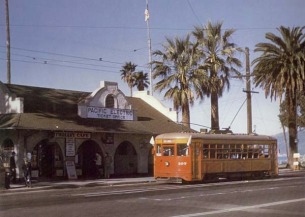